Regardless of the conditions where cats live, they are pretty much the same as far as personality and mannerisms are concerned. Cats are opinionated. Cats do what appeals to them. Cats protect their territory. You will see these characteristics in both feral and domesticated cats.

Cats love food. No matter how many times you have fed your cat, she will come back for more. Food says “home” to cats. Cats approach food in one of two ways.

Cats like to be clean. They approach cleanliness in unique ways. Nature gave them a scrub brush and located it in their mouths.They use their tongues to clean out foreign stuff in their coats, work out snags in their fur and clean between their toes.They wash their paws and then use their paws to scrub their faces.

Mother cats will groom their kittens several times a day. Grown cats that live in the same household will often groom each other.

The word “feral” means wild, a wild animal. A true feral cat is a cat that is born into a feral colony. But, what are the differences between Feral and Domesticated cats?

Male feral cats tend to be larger than male domesticated cats. Feral males are heavy, muscular animals with scars on their faces, ears and hind legs.

Feral cats tend to collect in colonies. They are safer in groups and kittens are safer with several females to look after them. Female feral cats are devoted mothers. Feral cats are mostly nocturnal. They sleep all day and roam after nightfall. Feral cats are smart, social among themselves, and good problem solvers.

Most adult Feral cats never make good house pets. They are always on high alert and spook easily. They don’t transition well from living outside to becoming inside pets.

All cats are very protective of food. If there are several cats in the household, each one will watch the others while they are eating to make sure no one tries to grab another’s meal.

Cats in the wild often rip off their portion of a kill and carry it off so they can eat while watching the others.

Some people have found a fairly docile cat among a feral colony and point to this as proof that feral cats can be tamed. More likely they probably have found a domesticated cat that was lost from or abandoned by their owners.

I just got through saying in a paragraph above that feral cats seldom make good indoor pets. But, if you see a cat you really want, and you have lots of time on your hands we can explore the possibility of turning a feral cat into a domesticated creature. Well, it is possible. But you, my friend, must have infinite patience, and you must let the cat think it is her idea.

Even though feral cats are wary of human beings, they can be coaxed with food. All cats love food and they will follow, at a safe distance, out of curiosity, to see where you’ re going with the food.

If you have one, for whatever reason, follow you home, don’t expect her to come in the house, or even come up on the porch. In fact, after you put down the food, the cat may disappear. Later, you will also notice that the food has disappeared, too. You can follow this routine for days, or weeks, before she will eat the food with you there.

Then, one day, to your surprise, she will show up at your door. No more going out to find her and guide her to your house with the food. She has taken the next step-she now comes to you for food. She may let you sit with her while she eats.

Now is the time to make a little bed on the porch or patio, or near the back door–where ever she comes for her meal. Make a little lean to or someplace where she can get in out of the elements.This may be as far as the relationship goes. She will trust you for food and shelter and she will make a great outdoor pet.

When she trusts you enough to let you pick her up and brush and pet her make arrangements with a vet to have her neutered or spayed. I use the pronoun “she” in reference to the cat, but male or female, your life will be easier –no kittens or no male yowls. After that little operation, she may be wiling to come inside upon occasion.

Domesticating a feral cat is a long process and takes patience.

Some compassionate people that hate to see feral cat populations wiped out by rounding up and euthanizing all the adults have instituted a program called T-N-R -Trap Neuter Return. T-N-R is considered a humane approach to the feral cat overpopulation. This program takes some veterinarians, willing to give their services and volunteers willing to give their time, so that feral cats can live in their colonies without continuing to increase the population.

It’s a simple action. Volunteers round up the males primarily, and take them to a veterinarian for a simple, quick operation, that they recover from quickly. They are returned to the colony and the colony continues without a continuous increase in kittens.

Simply put, if you feed and water outdoor cats, you have to get them fixed. Female cats can have 2 to 3 litters each year. Each litter will have 5 to 6 kittens. The female kittens from those litters can breed at 6 months of age. It doesn’t take long to be overrun with kitties. Spaying and neutering can stop the over breeding, as well as the yowling, spraying and fighting.

There are opponents to T-N-R. They say it just doesn’t work. Cats may not make as many kittens, but they are susceptible to rabies and other diseases from being on the streets. Also, volunteers get tired of feeding and watering them over the long haul. Helping strays is a long term commitment. Outdoor cats can live five to 8 years depending upon the hazards they encounter.

The only real way the help lower the cat overpopulation is to educate humans to be responsible for their pets. Cats should be taken to the vet to be altered anytime after 6 months of age. Cats should be seen by a vet at least once a year and they should be given the necessary shots. Above all, they should be kept inside. 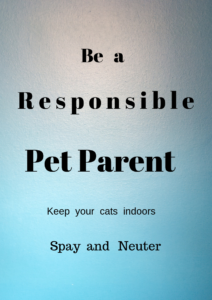 It may seem romantic to let the cat roam free but it isn’t. It’s irresponsible. Pets cannot take care of themselves. We have made them dependent upon us for everything.

For those who would like to read up on cats, roaming and otherwise, an English Veterinarian, James Heriot, has written a number of books on his encounters with pets and farm animals as well as their humans. The book I recommend is: All Creatures Great and Small. Any bookstore can get it for you. For information on T-N-R, check on Google.

I’m Barbara Nelson I’d like to hear from my readers. Let me know what you think.

10 thoughts on “What Are the Differences between Feral and Domesticated Cats?”