Everybody loves a movie about a courageous Dog. TV shows and contests about pets hold us captive. A Collie named Lassie was a must see for 19 years (1954 -1973) on Television and in movies. 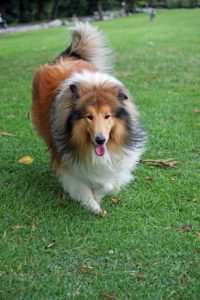 Rudd Weatherwax was trainer and owner of Pal, the first Lassie.

He eventually acquired the name and trademark. Pal and his descendants played Lassie for the whole 19 years.

The movie, 101 Dalmatians, inspired a lot of families to adopt one for a pet.

The 143rd Westminster Dog Show held dog lovers hostage in front of the TV set just a few weeks ago when “King” the wire-haired Fox Terrier from Brazil was selected as Best in Show.

But are movies, TV shows and Contests the best avenues to decide on a pet for our households? Do we get an accurate background of knowledge to make an educated decision on a particular animal?

Lassie, the canine star of the long-running TV show of the same name, was played by several dogs. The first dog to portray the female star Lassie was actually a male, named Pal. Pal was an excellent actor, doing most of the stunts on the first take. Pal’s son, Pal Junior came next. Subsequent offspring of Pal; – Spook, Baby, Mire and Hey Hey played the heroine for the whole series.

The Collie is a beautiful dog with an open, bright-eyed facial expression and a long flowing coat. She is a gentle dog and is very good with children. The Collie is an- all-around exceptional dog for a family. 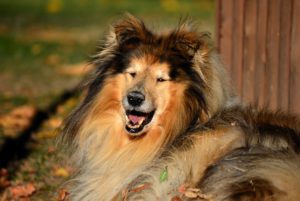 The breed originated in Scotland and Northern England and was used as a herd dog. The Collie is a strong, active, responsive dog, very intelligent, mild-mannered, and easy to train. Daily care includes lots of exercise and a daily brushing.

If you decided to get a Collie for the family pet based on the series, “Lassie” you would have probably made a good choice, considering temperament and ease of learning. But do not expect your collie to perform the gallant rescues that the TV Collie was specially trained to do. 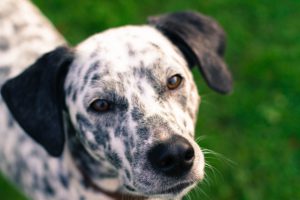 The movie was released in 1966 and immediately captured everybody’s heart. The story is pretty simple. The evil Cruella deVil is captivated by the dalmatian puppies and devises a way to get enough spotted puppies in order to make her a spotted fur coat. Of course the puppies owners thwart Cruella’s every move and she doesn’t get her coat and the puppies are saved.

Real puppies weren’t trained for this movie. Animatronics were used to create the puppy antics. Nevertheless, people fell in love with the adorable puppies and after the movie release, sales of Dalmatians shot up. Families were not prepared to handle adult Dalmatians and many were given up to pounds and shelters, which led to many of the dogs being euthanized. 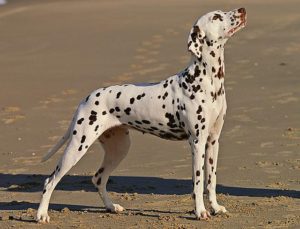 The Dalmatian is a medium to large dog, reaching 48 to 55 pounds and has a life span of 13 to 16 years. The origin of the breed is unknown. The name comes from Dalmatia, now called Croatia, on the shores of the Adriatic Sea.

“Born to Run,” the Dalmatian started out as a coach dog- a hunting dog- a fire house dog and a circus performer. The Dalmatian can act from gallant to goofy. He is affectionate and good with kids, friendly with other dogs, but not a dog for apartment living.

Dalmatians shed and need daily grooming. They have a high energy level and daily exercise is a must. This is a dog that was bred to run for miles and miles. In the days of horse drawn carriages, the landed gentry had Dalmatians run alongside the coaches for miles, and perhaps more than once a day.

These dogs have an endless capacity for exercise. They are intelligent animals and need rigorous training. Their owners need training too, on how to manage them. Finally, there is a possibility of deafness that runs in the breed. These are beautiful dogs, but can be more difficult to care for than most families can manage.

February 11 and 12, Dog lovers were glued to their TV sets waiting to see if their favorite breed would make “Best of Show” this season. Some were happy and no doubt, some were not so happy when the Best in Show, “King,” a wire- hair Fox Terrier won the title.

The coat is dense with twisted hairs. Th 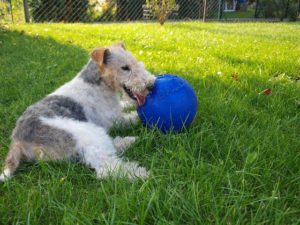 e hair grows thick and close together, so thick that when you try to part it, you cannot see the skin underneath. Wire hairs have an undercoat that is soft, smooth and short.

Fox Terriers are usually white with black and brown markings.The life span is around 15 years. Like most smaller dogs they present a bold, brave front. They are cheerful, lovable, enthusiastic and playful. They get along well with children and are devoted to family.They will get along with other dogs, if they have been properly socialized.

Terriers are intelligent and can be taught to do tricks. They do have a dominant streak and are very energetic – which means that they need lots of exercise, both mental and physical.

The dog’s owner must be 100 percent, all the time, firmly, his pack leader. Terriers need consistent rules to follow, with limits on what and what not to do. They are fine living in an apartment, as long as they have a vigorous walk or jog each day. 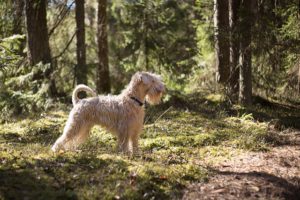 Wire Hair Terriers were originally bred to hunt, coming from a mix of Daschund, English Hound, Fox Hound and Beagle. Farmers used them to stalk and kill small prey.They are one of the oldest Terrier types, dating back to the 17th Century.

Up until 1984, all Fox Terriers were considered one breed, with two coat types: smooth and wire-hair. In 1985, the AKC recognized them as two distinct breeds.

Wire Hair terriers can make good family pets. They are willing companions for that morning jog and that evening constitutional. They do not shed,which makes them wonderful pets for allergy sufferers They need to be brushed once a day and only bathed when necessary.

The human being likes a certain amount of drama in his/her life. An activity that makes the heart race a little, the breathing come faster. It can be personal activity or the senses triggered by something we see. Action movies can give us a rush of excitement. We love movies where animals are pitted against what seem to be impossible situations, prevail and live happily ever after.

But deciding on a pet based on the tricks the movie animal does is not the right way to go. Those animals are especially trained by professional animal handlers. You can’t expect your pet to perform like a movie star. Do your own research and select the pet that suits you and your family.

11 thoughts on “My-Pet-Toys-And-Stuff: Do Show Dogs Influence our Pet Choices?”