Definition of a Stray

Last week I wrote a post on feral cats as opposed to Domesticated cats. Handling the stray dog problem is entirely different from working with feral cats. For one thing, size creates a special situation. Adult cats usually weigh 10 to 12 pounds at the most. Even if one should lash out at you, the most you would get is an an angry looking scratch.

They are terribly frightened,
hungry and out of control. Because of these things, they can be dangerous. Dogs run in packs. If one attacks another animal or a human, the other dogs in the pack will jump in the fray.

Countries like Bulgaria, Ukraine, Poland, Albania, Armenia, Moldova, and Serbia report increasing problems. These dogs become aggressive and can be a threat to humans. They also can carry rabies. Some countries have banned euthanasia. Governments try to control the problem by neutering and spaying but they often can’t keep up with the numbers of strays and new litters of puppies.

There have been incidents of humans being mauled to death by strays. Rabies, which many of these dogs carry, adds to the death toll for humans as well. Many countries now recommend to tourists to have a rabies vaccination before traveling.

Even though attacks from dog packs are usually a third world occurrence, it can happen in the United States. In South Dallas, Texas, it’s estimated that some 8700 dogs run loose, and about 85 percent of those have not been neutered or spayed. If those numbers are close to being correct, you can bet that none of them have received any vaccinations for rabies.

What to do About Stray Dogs

Many of our cities have similar problems with strays or dogs running loose. In most cases, it is not the dog that is the problem, but rather the owners of the dogs. Owners that do not have their dogs vaccinated or neutered or spayed are negligent.

A lot of dogs are not adequately confined while owners are gone. Instead of putting their dog in a safe place owners allow their dog to run loose behind a fence. Dogs are smart. They can find a way to jump over or dig under an ordinary fence.

Dogs are like people in some ways.They get bored with nothing to do all day. If they are left in a yard all day with nothing to do but lay around, well, you have heard the old saying, the grass is always greener on the other side.

If a dog gets out of his territory, he can become disoriented and lost. He may or may not find his way home. If his owner has been negligent and has not had him vaccinated or micro chipped, He may be lost for good.

Stray dogs become scavengers for food and garbage waste that people leave open or uncovered. One expert suggests that strays shouldn’t be euthanized or rescued in hopes of rehabilitating them as pets.

But rather humans should keep waste and garbage at a minimum and disposed of every day. If there is no garbage around then the stray dog and cat population would go somewhere else. I’m not sure I would go along with that “solution.” It may take care of the situation in the short term, but it doesn’t solve the problem.

One community has come up with a better solution which I will share with  you a little later in this article.

The stray dog problem is really a human problem. People who decide to adopt a dog should take time to understand the responsibility they have as a pet parent. Puppies are cute but they grow up. People should find out how big the dog will be when grown.

All dogs need training. Your pet wants to

please you. You must train him so that he knows what you want him to do. Your dog will give you unconditional love until the day he dies. He is dependent upon you for everything.

You have a lifelong, loyal friend. You owe him a forever home. Make sure you can commit to that before you adopt.

What to do When Encountering a Stray Dog

When you go out for a morning or afternoon walk, take your cell phone with you. Should you cross paths with a strange dog, never attempt to approach the dog. The animal may be hungry, thirsty, injured or frightened.

You may be concerned about the dog’s welfare but use good sense. You can call a humane society or animal control to get the dog some help.

If a dog approaches you, slowly back away and seek a safe place- inside a fenced area or enter a business. Always have some treats or kibble in your pocket. Dogs are always interested in food. With slow movements, take the food and throw it a ways off. While the dog goes after the food, walk or quietly back away.

Do not run from a dog approaching you. Dogs act upon fear, and if you run, you’ve activated their fear and they will run after you and jump you. Back slowly away from the dog–if you make slow movements it may cause the dog to relax and slow down as well.

Do not stare at the dog or make eye contact. Dogs consider this an act of aggression. If the dog comes at you – stand still. Again, don’t stare, drop your eyes. Let the dog sniff you. Try to remain calm. Dogs sense fear. Above all, don’t try to pat the dog. Any movement can be considered a threat.

If the dog starts to walk away, you should begin to back away slowly. Do not turn your back on the dog. If a dog knocks you off your feet, roll into a ball – covering your face and head with your arms. Don’t get up or move until you are sure the dog has left.

If the dog bites you seek medical help immediately and try to find the dog’s owner.

The best way to handle all problems of strays, dogs and cats, is to educate pet owners to take responsibility for their pets. Have dogs neutered or spayed after 6 months old. There is no excuse not to do it. Then have a secure place for your dog when you have to be away from home. Have your dog micro chipped as well.

Some dogs do all right being crated while their owners are away from home. Just remember that a dog can only wait so long to relieve himself, and make arrangements for someone to let him out for awhile after a certain length of time.

If your dog must be kept outside, then make sure he has shelter and food and water. 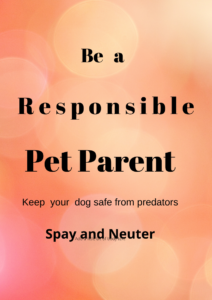 Just like any large American city, St. Louis, Missouri has fought with the stray dog problem. There were often reports of people being attacked by a stray dog. Illegal dog fights were uncovered. Rescue centers were always filled to capacity. Also, numbers of dogs determined as too vicious were being turned away from rescue centers.

In 1998, because of the compassion of one man for the desperate plight of street dogs, Stray Rescue of St. Louis was officially founded. Randy Grim has been rescuing dogs since childhood.

In 1990, He operated a dog grooming shop. He saw stray dogs roaming the streets in pitiful shape and started taking them into his home. But, he quickly ran out of space.

Eight years later, he sank his life savings into a building in mid-town. At that moment Stray Rescue of St. Louis was born. That first shelter is still in operation today. A new shelter was opened in 2010 with state-of-the-art equipment.

Stray Rescue has 60 staff members, an on-site trauma center, 300 foster parents, and more than 1,000 volunteers. Approximately 3000 animals are saved and adopted out each year.

Stray Rescue is recognized by the IRS as a 501c3 company. They are not a privately funded foundation and they do not receive government funding. They accept donations, legacies, bequests, gifts.

Most of the pets that are saved have been abused or abandoned. They have been dumped and abandoned on highways and country roads, in public parks, empty houses and alley ways. They have saved dogs left chained behind buildings and locked in houses after owners have moved away.

Stray Rescue also conducts programs to teach children and adults about responsible pet ownership. It is the largest no-kill organization in St. Louis and the surrounding area.

Stray Rescue of St. Louis is dedicated to carrying their message wherever it is needed. The possibilities of similar efforts across the country could, in time, wipe out the problems of stray dogs – and stray cats.

To all pet owners: BE RESPONSIBLE PET OWNERS.

Thanks to Slater & Zurz LLP for some information used in this post. I’m Barbara Nelson and I would love to hear from my readers.

10 thoughts on “How to Handle the Stray Dog Problem”