When I started this project, I had no idea it would expand to two articles. But when I began to put it together, I realized I had much too much material for just one article. So, both Cats and Dogs will get equal time. Personality wise, the dogs wouldn’t care or take offense, but the cats would expect equal time as their right.

A cat’s coat color can tell us something about her personality. I didn’t just make that statement up. As early as 1872 people have tried to link certain cat colors and patterns with certain personality types. We heard such descriptions as, “Temperamental Torties,” “Placid Tabbies,” or “White Mousers.”

Today’s domestic cats descended from one small group of African wildcats, who domesticated themselves about 10,000 years ago. They were all gray tabby cats resembling today’s African Wildcats- which would indicate that this color gene is dominant and carries through from generation to generation. Feral cats in rural areas in Europe and the USA usually have the same fur patterns.

You will notice that the rise of domestication in cats started much later than in dogs. Might be one reason our sweet little furry kitties sometimes act like crazy wild things. If you are a serious cat watcher, you might also see that every cat, no matter the color, or the circumstances of their lifestyle, believes that Royal blood courses through their veins. 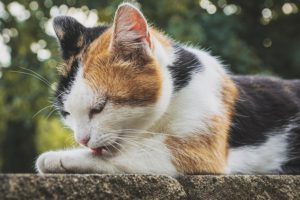 We are going to start with the cats that have coats of many colors: The Tortoiseshell and Calico. Torties have no white in their black, red, cream coats, while calicoes have a generous smattering of white mixed with black, red and cream. Torties and Calicoes are usually female; it is rare to find a male calico. Torties are vocal about everything. Calico’s are lively and loving. In Japan, Calico’s are thought to bring good luck. 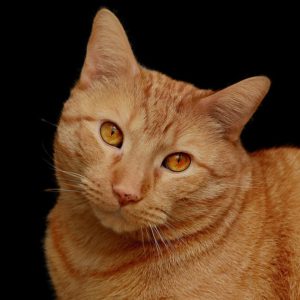 males is the ratio. These cats are lovable, but also assertive and aggressive. These male cats can also reach a good size–about ten to fifteen or more pounds and husky in build.

Red or Ginger colored cats are sweet, sassy and unpredictable. They may have the tabby markings as well. 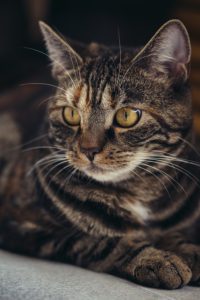 Gray cats are the sophisticates of the cat world-secretly they like to be let loose to let the wild side out.

Tabby -these are lovers of the good life. They can be various shades of gray and black with the true lines and circles that label them tabbies. They are good-natured and friendly.

Tuxedo cats- They are always dressed for any party occasion-Black with white vest, four white feet, and some times a little white on the face, or white whiskers.They lovable, but independent creatures. If let out, they will roam far from home. 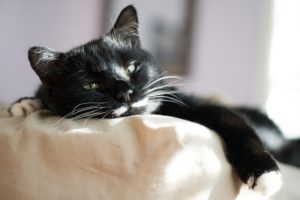 Black cats– their personality traits are closely related to their wild ancestors. Black cats were first seen in the wild. They are unpredictable and can roam far from home.

White cats– are timid cats-they are at risk of congenital deafness. In 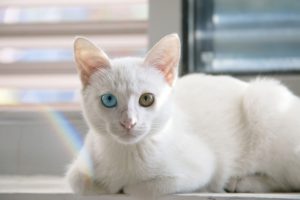 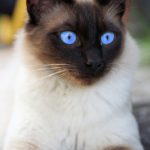 build, with long legs. They are assertive and vocal, to the point of driving you crazy.

The muted colors, blue, cream, gray and lilac are usually the Persian cats. These cats are playful, mischievous,and curious. They will run from one end 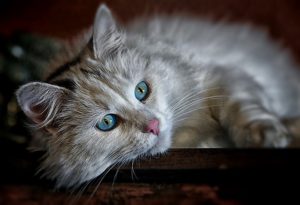 of the house to the other, chasing invisible prey.

A couple of traits that are usually consistent in all cat color variations are the eyes and the white in almost all coats. Cats usually have green eyes or yellow eyes. The exceptions are the Siamese and  the white cats with blue eyes, or one blue eye and one green eye.

As to major colors, almost all cats have some white in their coats. Most usually the white occurs around the under side of the cat and the paws. Sort of looks like each cat stood at attention while someone poured paint over their backs, and as the color ran down their sides, it left the underside white, and missed the paws.

Now after singling out these color coded cats, those of us who own cats know that there are as many color combinations as there are cats.

Cats that I have owned

I have owned a number of cats during my adult years. My first cat was a calico- female. She was a loving cat–to me. She wouldn’t tolerate anyone else.  She barely tolerated my son and my husband. The vet got the spit and yowl treatment.

My in-laws lived on a farm in the state of Kansas. Now, there are usually cats around the farm and my father-in-law’s farm was no different. There were plenty of cats around. Most stayed in the barn, to get fresh milk at milking time, and to keep the mouse population down. However, once in a while a cat ,or cats would catch my father-in-law’s eye, and they were promoted to life in the house.

One summer when we were visiting, I noticed two orange and white cats up at the house that were unusual. They had almost exact color markings.  One had a white blaze down his forehead and the other one was a boxer-that is he would stand on his hind feet and box with his front feet. I fell in love.  My in-laws let us bring them home to St. Louis. My mother-in-law said she was sending them off to college. We named the one “Blaze” and the boxer-what else?-Ali. Blaze died from a kidney problem at three; Ali lived to thirteen.

Jake came to live with me a few years later. Jake’s owner said she was allergic to him. I think she was scared of him. He weighed in at 16+pounds. He was gorgeous. All white long hair with a flowing black tail and a couple of black spots on his ears made up this cat from hell.

He had been declawed  and then let outside to fend for himself. He wanted to be petted and loved but I never knew when he would turn on me and scratch me with his hind claws. Finally, he figured out that it was just me and him and  I wasn’t afraid of him, so we settled in together. Jake lived to be 16, and I’ll never forget him.

The two cats I have now are sisters. Janie is a Tortoiseshell and Julie is a Tuxedo. I adopted them when they were about 2 years old. They are now 13. Janie is allergic to all kinds of foods that cats would normally eat. The only way she can keep food down is to take prednisolone every day. I keep a vaporizer going all day and night to keep her from sneezing her head off.

Julie is smaller than her sister, but she actually rules the household. She plays all the time and runs through the house like a maniac She also is a nurse to Janie. Julie grooms Janie every day and sleeps next to her to keep her warm. It is amazing to see the level of devotion the little tuxedo has for her ailing sister.

Our pets can teach us something about living from day to day and in the moment. That is what they do. Each day to them is the only day to be concerned about. Forget about yesterday and tomorrow isn’t here yet. The only day we have any control over is today. Live in the now.

I would love to hear from my readers. Let me know what you liked and what I missed.

Information for this article came from:  Cattime.com; The Thought Co.; Dog time.com; Dog Reflections, May 2008 by Dan; Pet Wellbeing; Pixabay.com.