Horses, Donkeys, Mules, are usually lumped together, whenever horses have anything written about them. It just seemed to me that Horses deserved top billing. And perhaps Donkeys needed a little more than a passing mention.

All too often Donkeys are the butt of jokes, and the receiver of painful roping and throwing tricks at Rodeo’s. They are more often known as beasts of burden. Donkeys, as well as Mules, are necessary creatures in mountains and wastelands for carrying packs and supplies, where more modern modes of transportation are unable to go.

In the 19th century Gold Rush years, prospectors in California and surrounding areas used donkeys and mules as their beasts of burden. When the gold frenzy slowed and mines were abandoned, so were many donkeys. Some escaped, most were abandoned as the miners left their digging to find other ways of making a living.

History of the Donkey 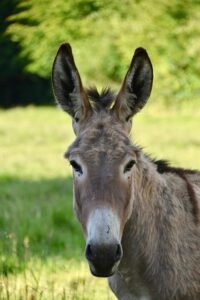 Donkeys were domesticated and later turned wild in the western United States. In some areas of the West, donkeys are referred to as Burros. When the Spanish settled in Mexico and Southwest U.S. they introduced Burros as pack animals.

Burros and Donkeys are the same species. “Burro” is Spanish for Donkey. Burros are slightly smaller than the American Donkey. Both species are found in the western States of Arizona, California, Oregon, Utah, Texas, and Nevada.

The donkey has been around since 4000 B.C. and originated from the African Wild Ass. They are a member of the Horse Family Equidae. The donkey (Equus, asinus) stands about 40 inches at the shoulder. It has been beast of burden from the beginning of its existence and its relationship to man.

The Donkey can be characterized as patient, slow and sure-footed. All of these attributes are exceptional for balancing and carrying heavy bulky loads over rocky countryside. Unfortunately, man often considers the Donkey as stubborn and stupid, and mistreats him because he is funny looking and funny sounding.

People who have visited Desert places understand very quickly how important water is for continued life. Animals certainly know this too, especially animals who live in our southwestern states.

Donkeys and horses who live in desert climates know they need water and take action by digging wells. Yes, digging wells. National Geographic has reported on well digging activity by these animals. In doing this they not only supply water for themselves, but they create oases for other wildlife and plant life in the area.

Some of these wells can be up to 6 feet in depth. They use their front hooves to shovel sand up and backwards while the back hooves push the sand back from the hole.

This is defined as “ecosystem engineering; a phenomenon where wildlife alter their environment”. The horses and donkeys are just looking for water, but they are building a whole environment, giving life to other animals and plants.

Badgers, Black Bears, mule deer and big horn sheep and all kinds of birds inhabit the oases that support plant life, willows and cottonwoods. In the North American Sonora Desert and Mohave Desert, something like 57 species come to drink at these wells.

Well-digging by horses and Donkeys not only occurs in the U.S. but has been observed in Queensland, Australia, southern Australia, in the Gobi desert, and Sable Island, Canada.

The above story may be one good reason for the Bureau of Land Management to re-evaluate the management of the horses, donkey and burro in the Southwest. The BLM manages the wild population of about 90,000 of these animals and the federal government holds another 50,000 in corrals throughout the west at great expense as a way to curb wild populations.

Even though they may have been introduced into the environment and are not a naturally wild species of our deserts, they perform a vital ecological function. There is a lot of room in our great American Southwest, why are we so insistent on reducing their numbers when they provide a necessary ecological function?

Much of our information about donkeys comes from anecdotal bits and pieces: donkeys are funny looking, they make weird sounds called braying, they are stubborn, they won’t move until they are ready to move, they are stupid. But none of those descriptions are based on fact only.

There is an organization in Texas called Peaceful Valley Donkey Rescue, and as their title indicates, they rescue Donkeys from abusive owners, and neglect, abandonment and those being sold to slaughter for their meat and hides. Donkeys are known to be loyal to their owners, even owners who mistreat them.

Donkeys are not aggressive, but are rather gentle. With these characteristics, Donkeys actually make good pets. It seems that families with children can adopt one and know that their children can ride a donkey safely. Peaceful Valley holds adoption centers and education classes for those who are looking for a pet a little out of the ordinary.

A Long, long time ago, centuries before buses, cars, trains were in existence, people rode donkeys and mules. Move backward to Biblical times, to find stories about men riding donkeys. This account is recorded in the Old Testament Book of Numbers, Chapter 22. It’s the story of Balaam, a diviner, who has been called by Balak, King of the country of Moab, to come and put a curse on a new group of people who have settled in the country next to Moab.

Balaam decides to go, and saddles up his donkey and starts out on his journey. A little while into his trip, the Donkey veers off the road into a field, and will go no further. Balaam is angry with her and beats her for changing course. Everybody gets back on the road and continues on.

A little way down the road and the Donkey veers off the road again, and again Balaam beats his Donkey to get her back on the road. For a third time, the donkey stops and this time lays down in the road and Balaam is dumped off the donkey.

He is so angry he threatens to kill her. Now, miracle of miracles, this donkey speaks and she asks Balaam, “Am I not your own Donkey, which you have always ridden, to this day? Have I been in the habit of doing this to you” ? “No” Balaam answered.

Then Balaam sees an angel of the Lord with sword drawn, ready to kill him except for the donkey’s intervention. Other mentions of a Donkey and her colt occur in the New Testament of the bible and refer to Jesus riding on the colt of a donkey into Jerusalem.

Scriptures also indicate that Mary, the mother of Jesus, rode a donkey to Bethlehem.

During the Gold Rush there were stories told that Donkeys saved the lives of their owners by shoving them out of the way of falling rock. Sometimes the Donkey sacrificed his life to save his master.

Mark Meyers of Peaceful Valley, sums up his attitude toward Donkeys: “The sad truth is that even though donkeys are intelligent, curious, and friendly creatures, they are the most abused. —these innocent animals are roped for fun, rounded up by our government and shipped to slaughter—and abused on a daily basis….. These are the same creatures that helped build America and faithfully served humans in farming, transport and even Warfare.

He continues: “they love attention, being touched, petted and will do anything for a treat. They are just like big dogs.

One other reason that Donkeys are shipped off to slaughter is that their hides contain a gelatin: ejiao or(e-gee-ow). The gelatin is made by boiling the hides of slaughtered Donkeys. It is used in a variety of products -facial creams, powders, and snacks. The largest percentage of these products are

sold in China, but many can be found on Amazon and eBay.

Mules are the favored pack animal in the United States. I went to the American Mule Museum, via google, for information on this cross between a horse and donkey. Mules must have bred naturally in the wild where the wild Ass and the horse occupied the same territory.

Mules have been bred deliberately by man since ancient times. People in parts of Turkey were the first to breed mules. Mules were in Egypt before 3000 B. C. Mules have been in the Holy Land since 1040 B.C. The mule is the favored pack animal in most countries and the U.S. The Mule was also the favored “Royal Beast” or the favored riding animal of the Princes in ancient times. King David of the Hebrews rode Mules.

A Mule is a cross between a male Donkey and a female horse. These Mules are usually sterile, that is, they cannot breed more mules. The horse and the donkey have a different number of chromosomes. Less common is a male horse crossed with a female donkey. In that case the animal is called a Hinny.

In any case, they are large, mild-mannered, sure-footed animals that can carry much larger loads than can donkeys.

I’m Barb Nelson and author of this post on donkeys and Mules. I receive nothing from the above mentioned organizations except general information used in this post.

I would love to hear from my readers. If you enjoyed reading about these animals, write me a comment.

6 thoughts on “5 Historical Bond between Donkey, Mule and Man”